Women Rise at Davis Tech Presents: Rising Through the Journey with HAFB

Women Rise at Davis Tech Presents: Rising Through the Journey with HAFB 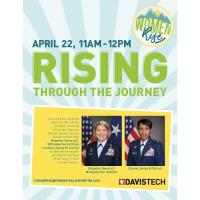 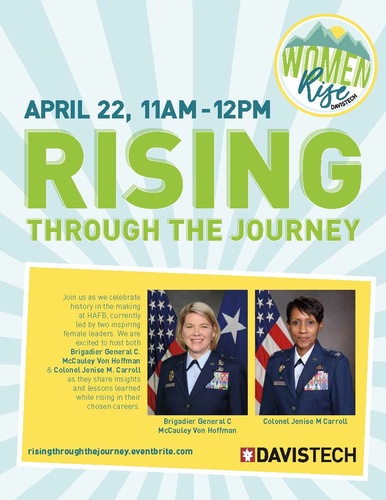 Join us to learn from two extraordinary leaders as they share experiences and lessons learned in Rising Through the Journey of leadership!

Women Rise at Davis Tech is excited to kick off 2021 with an opportunity to learn from two incredible leaders; Brigadier General McCauley Von Hoffman and Colonel Jenise Carroll, of Hill Air Force Base. For the first time in HAFB history, both the base and the military are led by women, and we are privileged to bring them together for a unique learning experience.

Join us virtually and hear both women share their personal journey of rising into leadership within the US military.

Brig. Gen. von Hoffman hails from Columbus, Mississippi, and received her commission through ROTC at Vanderbilt University in 1989. She began her career as a supply and fuels officer and later cross-trained into aircraft maintenance. She has since had assignments in both fighter and airlift weapon systems, logistics command and control, studies and analysis, as well as joint operations and logistics. She has published work in the Air and Space Power Journal, the Air Force Journal of Logistics and with RAND Corporation.

Prior to assuming her current position, Brig. Gen. von Hoffman served as the Director of Logistics, Engineering and Force Protection, Headquarters U.S. Air Forces in Europe-Air Forces Africa, Ramstein Air Base, Germany. She has held the position of Mobilization Assistant to the Director of Logistics, Engineering and Force Protection, Headquarters Air Combat Command, Joint Base Langley-Eustis, Virginia. She has commanded a squadron and group. General von Hoffman also served as both Chief of a Joint Operations Center for a combatant command and Assistant Deputy Director for the Joint Chiefs of Staff. She has served tours in the Pacific and Europe and deployed in support of several contingency operations including operations Desert Shield, Desert Storm, Provide Comfort, Northern Watch, Coronet Oak, Iraqi Freedom and Enduring Freedom.

Colonel Carroll received her commission from the United States Air Force Officer Training School in January 1996. She has served in a variety of positions at base, joint, major command, and staff level. Her wing-level assignments include tours as a Flight Commander, Squadron Commander, Executive Officer and Group Commander.  Her staff and joint tours include the Air Education and Training Command, Air Force Personnel Center, Air Staff, Office of the Secretary of Defense and United States Transportation Command. Her deployments include Operations CONSTANT VIGIL, NOBLE EAGLE, IRAQI FREEDOM and INHERENT RESOLVE.  Prior to her current position, she served as Director of Legislative Affairs and Washington Office, United States Central Command, Pentagon, Washington, D.C.