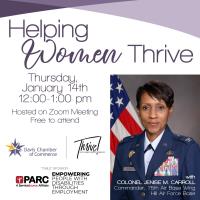 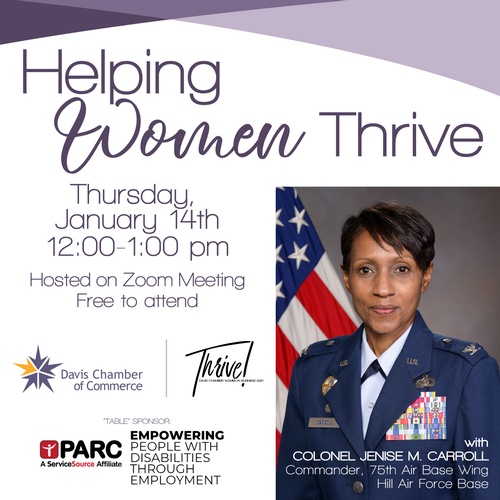 Colonel Jenise M. Carroll from Hill Air Force Base will be speaking at our January Women in Business Luncheon! Please join us on Zoom to hear her speak! 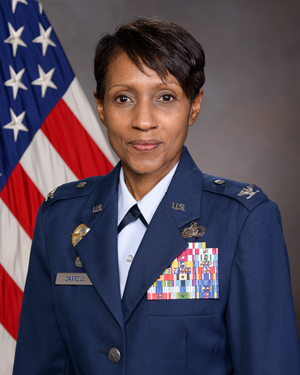 Colonel Jenise M. Carroll is the Commander, 75th Air Base Wing, at Hill Air Force Base. She is a native of Houston and this assignment is her first in the state of Utah. This month we will be thrilled to hear her speak about how she has been able to thrive as a woman in a non-traditional setting and has been able to accomplish many amazing things. She is passionate about inspiring young females to become leaders in the Air Force. She said, "What I offer women as I serve in this role is there's nothing we can't do. Given the opportunity, go for it. You may not see anyone that looks like you in that role, but that doesn't mean that you shouldn't break down that barrier and move forward to show the next generation that it is possible."

Colonel Carroll has been awarded multiple major awards and decorations for her service in the Air Force and on her deployments, some multiple times. She has been deployed in four operations, including ones that helped curtail the South American drug trade to North America, helped protect critical infrastructure locations after the 9/11 attacks, and helped stabilize and provide humanitarian assistance in Syria and Iraq. Serving in the Air Force for over twenty years, Colonel Carroll has been named Field Grade Officer of the Year and has many educational accomplishments including a Graduate Certificate in Organizational Management from George Washington University and a Master of Science in National Security Strategy from the National War College.

She has had many high-level assignments including her previous assignment as the Director of Legislative Affairs for the U.S. Central Command at the Pentagon. In her current position, a big part of her job will be to inspire the next generation of airmen to achieve at the highest level they can attain. She said, "I use the three L's: learn, listen, and lead. It's very important as a leader to learn the environment that you are now involved in."